Wisdom Of The 90’s: Chris Farley

What can we learn from the 90’s?  Are there real lessons for us from a time that gave us “The Macarena“, Steve Urkel, and Jerry Springer?  I contend there is wisdom to be gained, if only we look in the right places.  This series will dive into the culture of a decade that changed so much.

A Place At The Table

The pages of history capture the myriad ways that certain men have shown their excellence: some through achievements far beyond compare, others through singular athletic accomplishments, a select few through medicinal breakthroughs, a handful through glorious military victories…and one man through falling on a coffee table to it’s complete demise. That one man was Christopher Crosby Farley, and part of his excellence was his frenetic, physical comedy.  And the destruction of aforementioned tables. 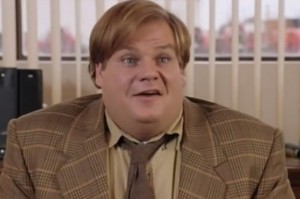 Farley, and his unique ability to gain not just a chuckle but real belly laughs from audience and peers alike, burst through the 90’s like a blazing comet in the sky.  That is, if the comet could barely keep it’s pants from falling down.

Until his tragic death of a drug overdose on December 18, 1997, Farley burned his comedic impact deep into the American public so that even today, his legacy lives on.

The Fall In Our Stars

Let’s be real — it takes a special type of talent to make falling down truly humorous.  The number of humans who can generate laughs just by the simple act of crashing to the ground is very, very small. Yet, Farley possessed that talent in superior amounts.  His falling and physicality brought his characters to life and his audience to laughs.

Consider: The swinging arms of Matt Foley as he ponders “how do we get back on the RIGHT track?!”.  Instantly memorable and forever copied by anyone familiar with it.

The throat grab of his “staaaarving” valley girl.

The oh-so-exaggerated air quotes of his “too much info” news anchor.

The “fat guy in a little coat” scene of Tommy Boy.  Seriously now…just how many guys can MAKE that scene funny besides Farley?  Not many!! 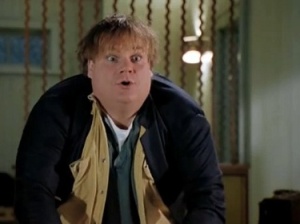 His Superfan trying to dislodge the “poooolish saaaaausage” in his chest.

His nervous ticks as host of the “Chris Farley Show”. (for my money, one of the underrated Farley roles!) 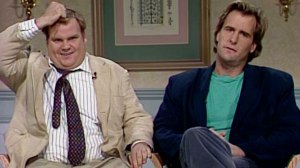 And of course, “here’s you, here’s me!” leading to the table decimation.

This list could go on and on — countless characters and skits that Farley made so memorable.  I’m not even sure how the writing process went either.  Did they have just that much confidence in Chris to make a real basic premise seem like such fertile ground for laughter?  When Bob Odenkirk (he of Breaking Bad and Better Call Saul fame) wrote the “motivational speaker” skit, did he just he know Chris would take it to such heights?  On paper it was just an awkward middle-aged guy in the living room of a normal family — but with Farley, it became legendary.

Many comedians are remembered for their punchlines, their wit, their impersonations, or even their cadence…but Farley’s legacies are the frantic waves of arms, the desperate tug on pants as they keep sliding down, and the ability to make people laugh with his falls.

Farley Versus A Decade

Why did Farley’s humor work?  It is folly to try to explain comedy, but allow me just a moment here.  I contend his impact had much to do with his comedic partner in crime for many skits and movies: David Spade.

Spade was the perfect foil for Farley’s bombast, movement, and loudness.  Spade was everything Farley wasn’t: thin, frail, know-it-all, caustic, biting with sarcasm, cynical, above it all, and impersonal.  No physicality, just a roll of the eyes and a sharp one-liner.

The 90’s saw the cynicism of Nirvana and their bored-with-it-all cry to “entertain us,” the disillusionment of listening to the President explain away what happened with his intern, the “yeah whatever” feel of many of our So Called lives, and the beginnings of a rage against various machines.  Remember, the teenagers of the 90’s voted Beck’s “Loser” as the SONG OF THE DECADE?

Spade was the quintessential young guy of the 90’s.  He was the decade in flesh.  He was pieces of all of us.

Farley just happened to be the best friend everyone wished they had.  He didn’t care about crafting a perfect observational zing so all could marvel at his intellect — he just wanted you to have fun.  He wasn’t out to one-up you with his sarcasm — he was ready to crash into walls and tables to see if it pleased you.  Farley was anti-self-important.  Cynicism and sarcasm were crushed beneath his gut…and that coffee table.

He wasn’t “above it all”…he was flattening it all.

It was up against the angry sarcasm of Spade’s embodiment of the 90’s that Farley worked so well.  He was the breath of fresh air so necessary for those times. Can you imagine the 90’s without him?  How badly did that decade need his joyful spirit and total lack of pretension?  How sorely would he have been missed?

The Wisdom Of Falling Down

So where is the wisdom in this 90’s lovable and eager character?  Sure, his downfall and death can serve as a “cautionary tale,” and in fact, sadly those things reinforce the truth that the popular gods of money, fame, and even making others laugh cannot sustain our longings for lasting joy.  Those lessons are clear and we see them repeated often in our culture.  However, I think we gain something better from Chris Farley.

Maybe the wisdom from Farley is simply this:  it’s ok to fall down sometimes, and it’s ok to laugh about it.

Too often, we take ourselves and our mistakes too seriously.  We can be so guarded about failures and goofiness that we forget the joy and laughter those things can provide. When you gather with longtime friends, what stories get the belly-laughs and the tears of joy flowing?  Is it the tales of your success?  No.  It’s often the embarrassing moments, the awkward situations, the failures…the times you, metaphorically, “fell on the table.” And that’s perfectly acceptable and good for you. It’s ok to fall down and it’s ok to laugh about it.

This world has trouble and hard times.  There’s adversity and challenges you face often.  But in the middle of all that, what’s needed isn’t another sarcastic quip or cynical joke…sometimes, we need our own exaggerated air-quotes and more fat guys in little coats.  We need less 90’s and more Farley.

Laughter is a gift from God.  It points us to a Creator.  Indeed, it is a sure sign of His existence for why and how could you “evolve” laughter?  Lol indeed.

At the center of all existence is the God of the Bible; the God of all JOY!  That’s incredible news!  God is the most joyful One in existence and it is for our benefit to grab on to the moments in life when we can laugh at ourselves.  It shows we have perspective instead of foolish pride.

Hey Chris…Thank you for casting aside ego to struggle with those pants and ridiculous glasses.

Hey Chris…Thank you for doing away with self-importance so we could all double over with laughter.

Hey Chris…Thank you for showing us it’s ok to fall, and it’s ok to laugh as we do it.

Hey Chris…Thank you for falling.  I just wish you didn’t have to fall so far.

Have a piece of 90’s culture you want me to consider for this series?  Hit me up at joshhumbert@gmail.com