Allen Iverson And The Wrath Of God

In the middle of the ’90’s, an immensely talented basketball player arrived on the scene in an undeniable way. Allen Iverson was inescapable, unavoidable. Some thought he was the next-big-star for the NBA, a whirlwind of blinding speed with a killer-crossover dribble capable of felling even the greatest ever, Michael Jordan. Others thought he was selfish with a me-first attitude that hurt his team. No matter which camp you fell into, nobody could look away.

Though small in stature…Iverson demanded a respect.

In the middle of the Old Testament, an immensely powerful book arrives on the scene in an undeniable way. Nahum is a sequel to the book of Jonah and it details the complete destruction of the city of Nineveh by the coming of the wrath of God. The brutal, violent people of Nineveh are shown mercy and patience by God for centuries…they only repent for a short window of time when Jonah preaches. Soon, they repent of their repentance and head back to their old ways. After years of waiting, God decides it is time for Nineveh to be wiped out. 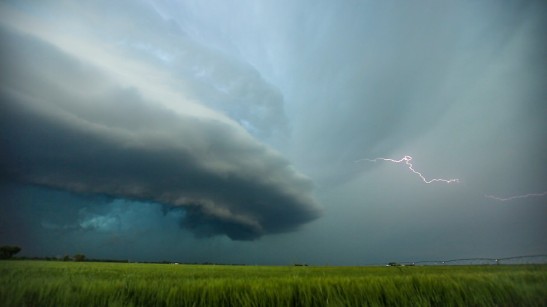 Nahum is a short book and he’s considered a minor prophet. He is tasked with the declaration that Nineveh’s days are over. He must tell of the terrible, awesome wrath of God. Whatever his book lacks in length, Nahum’s message about the wrath of God comes forward with a fierceness that seems palpable.

Though short in pages….Nahum’s prophecy demands a respect.

The Question To Be Feared

Just reading the first 8 verses of Nahum you encounter a towering, terrifying glimpse of the wrath of a Holy God. Here, see for yourself:

The oracle of Nineveh. The book of the vision of Nahum the Elkoshite.

A jealous and avenging God is the Lord; the Lord is avenging and wrathful. The Lord takes vengeance on His adversaries, and He reserves wrath for His enemies.

The Lord is slow to anger and great in power, and the Lord will by no means leave the guilty unpunished. In whirlwind and storm is His way, and clouds are the dust beneath His feet. He rebukes the sea and makes it dry; He dries up all the rivers. Basin and Carmel wither; the blossoms of Lebanon wither.

Mountains quake because of Him and the hills dissolve; Indeed the earth is upheaved by His presence, the world and all the inhabitants in it.

Who can stand before His indignation? Who can endure the burning of His anger? His wrath is poured out like fire and the rocks are broken up by Him.

The Lord is good, a Stronghold in the day of trouble, and He knows those who take refuge in Him. But with an overwhelming flood He will make a complete end of it’s site, and will pursue His enemies into darkness.

Understand: this description didn’t “accidentally” make it into the Bible. This didn’t just slip past the editors. God is not caught unaware that these verses are in His holy Word. There’s purpose here: God wants us to see the complete picture of His nature and character, including His wrath toward sin. Nahum uses every word in the Hebrew language to capture the fullness of God’s wrath; there’s totality here. 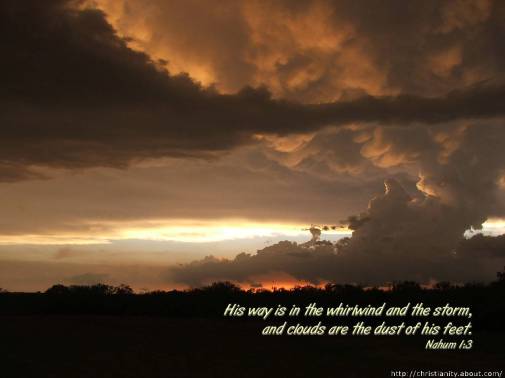 The God of the Bible is holy: He is perfect and right and pure in every way. He will not tolerate sin. He will not simply sweep it under the rug. This is as it should be. If there’s a god who will look the other way in regards to sin, he isn’t worth worshipping. If there’s a god who accepts excuses or doesn’t care about sin, I want no part of that.

The chilling passage challenges us all with a question that haunts. The question that demands an answer is in verse 6 where it says:

Who can stand before His indignation? Who can endure the burning of His anger?

The answer surely isn’t Nineveh for they were utterly destroyed. What was possibly the strongest city on the planet at the time could not “stand before His indignation.”

The answer surely isn’t you or me either. I’m a sinner too. I see traces of Nineveh in my mirror all the time. I’ve sinned against God…I cannot “endure the burning of His anger.”

Is there an answer here?

The question still hangs in the air, but perhaps Iverson has more for us to consider with Nahum. Though he was known as “A.I.” (his initials), there was a more prominent nickname for Iverson.

Allen Iverson was known as “The Answer.” 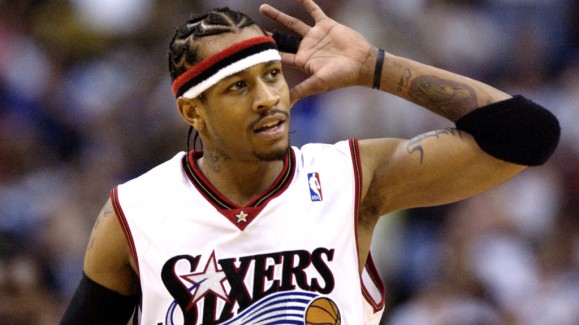 I have to admit: pretty great nickname right there. I never really knew what the Question was…but Iverson was The Answer.

For a guy who faced a litany of doubts, the nickname fit.

The Answer, though. The Answer was not a sentence or a mere rebuttal.

Through his fierce play, Iverson sought to respond to every single one of the questions others had for him. He wasn’t just a basketball player, he was an Answer.

The Crossover To Christ

Now, you see where Nahum’s question was pointing to something…or rather, Someone greater. The Answer is a Person.

Who can stand before the wrath of a holy God for MY wickedness? Who can endure the burning of God’s anger for MY sin?

The Answer is a Person. The Person is Jesus Christ.

The question of Nahum 1:6 is fully, finally, and forever ANSWERED in the life, death, and resurrection of Jesus Christ. Yes, God’s wrath is terrifying and real…but in His amazing love, He has made a way for sinners like me to never have to taste a drop of it.

God demonstrates His own love toward us in that while we were still sinners Christ died for us. Jesus came to earth and lived a life of perfect obedience and He willingly took the full cup of wrath for sinners on the Cross. The Answer bled for you. The Answer died for you. And the Answer rose again in power three days later to show He is the only True and Right Answer in this world. Every other religion or philosophy in this world can give you some nice ideas and teachings…but the Answer is only found in the Gospel.

The Word Of Comfort

I find it interesting that Nahum’s name means “Comfort.” How fitting for a man who’s mission was to tell of the destruction of Nineveh. The city of Nineveh was full of blood-thirsty people who did unspeakable things to their enemies. As one commentator remarks, “Nahum voices the outraged conscience of mankind.” Nineveh was everyone’s feared enemy.

So…their destruction, even after centuries of patience shown by the compassion of God, comes as welcome news. Nahum brings the word of comfort to a beleaguered and beaten world. What they feared most is taken care of by God.

If you have sinned and run from God, if you think you are too far away, if you think you’ve sat in the darkness too long, if you think there’s no way He could love you….I have a Nahum for you. I have a word of comfort and it’s the best news you’ll ever hear.

The wrath of God, what you should fear the most, has been taken care of by God. Through Jesus, there is grace available to you right now. Through the Gospel, you go from Ninevehite to child of God. There is a Way out. There is an Answer for your doubts.

And here, for the soundtrack to this piece, you’ll find a classic version by Ascend The Hill.

This entry was posted on August 15, 2018 by Josh Humbert in Blogroll, Wisdom Of The 90's and tagged AI, Allen Iverson, Ascend The Hill, Nahum, the 90's, The Answer, Wrath, Wrath of God.