If you were to list out some of the most acute societal problems we face in America, you might come up with things such as: crime, poverty, divorce, sex trafficking, substance abuse, overcrowded prisons, educational challenges, children born out of wedlock (and all that leads too), physical abuse, gangs, abortion, and confused sexual ethics.  That is quite a list and it surely doesn’t cover all that we face.

As the time for political elections move closer, you will surely see an abundance of glittering promises about “new measures” or “drastic reforms” or “increased funding” or “new solutions” to these issues.  The politicians invade the television with their programmed sound bytes and canned speeches about “all they will do” to help turn things around.  To change it all.

If we are honest, we will look at that list and intrinsically know that more funding or government programs won’t be the final answer.  Sure, there can be some corrections here and there; if we are wise with our vote we can still enact some good things.  But c’mon.  That list goes way too deep.

But…what if there is a single solution that would touch just about every single issue (and more) on that list?

Many Symptoms, One Solution

Could it be that the solution we desperately need is right there in front of us?  Well, perhaps we don’t see it because we have clouded the picture.  Ours is the culture that has disregarded and, yes, even hated the solution.  But it is right there for us.

What is it?  I’m no politician or even some expert, but my “plan” is straight old school.  The solution is dads.  Fatherhood.  Real men who really love their wives and have a real desire to raise their children well.  Fathers.  Dads.  That is the key.

I look back at that list and I see the LACK of strong fathers playing such an integral role in ALL of it.  It is simply amazing to think there is one solution that can touch so many different parts of our nation, but it is true.  A real father who loves his wife and his kids WILL GREATLY impact about every great ill that we face.

(Want to get lost on an research-worm-hole?  Start researching fatherhood and what the numbers show in relation to that list.  It is staggering.  The evidence continues to be overwhelming in regards to a father’s influence on all parts of society.)

Fathers.  Good dads.  This is what we truly need more of if we want to see things changed in the very fabric of our country.  And yet, we seem to miss it.  This solution slips past us so easily.  Why?

Calvin and Hobbes (by Bill Watterson) is one of my all-time favorite comic strips.  I have almost all the books and collections of the strip and even though I have read them many times before, I will still come back to Calvin and Hobbes every so often.  (I think I could write several blogs on just the strip itself!)

Watterson’s strip takes a rambunctious six-year old boy (Calvin) and pairs him with a wise, patient friend (a Tiger named Hobbes).  That’s the basic premise but Watterson grows the strip into such a wide and deep exploration of numerous themes including family, childhood, religion, philosophy, romance, adventure, and yes…fatherhood.

One of the recurring story-lines in the strip is that young Calvin tries to sway his dad into things like a bigger allowance and a later bedtime with the threat of an upcoming vote.  You see, Calvin tells his dad of the “upcoming election” and how his dad might be “voted out of his office” as dad.  Calvin continually comes up with these alleged polls that show his dad is falling behind.

Here is a sample:

The humor is rich and creative.  And perhaps there is something more here.  It could just be that Watterson has found a way to capture what has happened in our culture.

By and large, we have already cast our vote.  We want the polls closed.  “Dad” is out.  We have ousted Fathers.

Is that too strong?  Have we voted out dad?  If we hold up the evidence, maybe Calvin’s polls were trending correctly all along.

Have you seen strong evidences of fatherhood on TV?  Sure, there are rare exceptions from older shows like Bill Cosby and Corey’s dad on Boy Meets World.  Real men who loved their lives and were intentional in raising their kids well.  And there may be a few more sprinkled out.

But keep flipping those channels and what do you see?  Homer Simpson.  The Family Guy dad.  Maybe old reruns of Married With Children and Al Bundy.  Just about any dad on the “comedies.”  By and large, the dad on tv is a simple-minded buffoon who can’t solve any problems and generally serves to move the plot forward with his silly antics or absent-mindedness.

The dads we see on TV (and in commercials, movies, etc) are bumbling buffoons who can’t do anything right.  Or they are constantly angry and tired.  Or they are not even in the picture at all.  The mom knows better, the kids know better.  EVERY one knows better than ol’ dad.

He doesn’t know how to handle his kids, can’t change a diaper, and has no clue about what’s really going on in the world.  He is out-dated and out-matched.  It’s pathetic, but it reflects the culture at large.  We don’t respect fathers.  We don’t look to them for wisdom.  They don’t raise us so much as just get in our way.  They aren’t a solution…they are the punchline to our jokes.

If what the TV and culture shows us is representative of our dads today, then WHO would want a dad “holding office,”?  Maybe the vote has already been cast.

How I (Never) Met Your Father

So maybe we don’t realize fathers are the solution because the image is marred by the simpleton’s on the shows.  But perhaps there is another element at play.

Could it be that another reason we don’t see fatherhood as the solution is because dad isn’t even there in the first place?

While I was in high school, the band Everclear released a song that seemed to capture the situation for SO many homes.  Art Alexakis, the lead singer for Everclear, wrote this song as a lament over his own dead-beat dad who was only involved in his life for a short time.

To say the lyrics are ‘poignant’ or ‘strong’ is not sufficient.  This is a grown man bearing his heart and showing the deep, enduring scars that resulted from fatherhood gone wrong and gone completely.  It is brutal, human pain encased in a song.  This is the song Father of Mine:

Father of mine, Tell me where have you been?

You know I just closed my eyes, My whole world disappeared.

Father of mine, Take me back to the day

Yeah when I was still your golden boy, Back before you went away.

I loved it when you held me high, I loved to hear you talk.

Take me to a place inside that is so hard to reach.

Father of mine, Tell me where did you go?

Yeah, you had the world inside your hand

But you did not seem to know

Father of mine, Tell me what do you see?

When you look back at your wasted life

And you don’t see me?

I was ten years old, Doing all that I could

Sometimes you would send me a birthday card with a five dollar bill.

Yeah I never understood you, dad, and I guess I never will.

Daddy gave me a name,

My dad he gave me name, Then he walked away.

Daddy gave me a name,

Then he walked away.

My dad he gave me a name.

Father of mine, Tell me where have you been?

Yeah I just closed my eyes, And the world disappeared.

Father of mine, Tell me how do you sleep?

With the children you abandoned?

And the wife I saw you beat?

Now that I’m a grown man, With a child of my own

Then he walked away

Daddy gave me a name,Then he walked away

My dad he gave me a name

Then he walked away

The crushing reality is that the lyrics Art composed could be written by millions of children in our culture now.  “My dad he gave me a name, then he walked away.”  That’s real talk for at least 1 in 3 homes (and probably many more, as research shows). 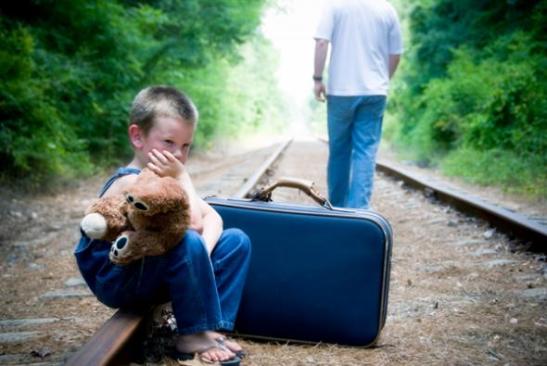 Some kids can’t vote dad out of office, but it’s because he resigned his post long ago.  Dad didn’t stick around to be impeached; he ducked out the back door long ago and never came back.

Of course we don’t see fatherhood as a solution…because for so many people, it has only been the source of great pain and loss.  Father of mine, tell me where did you go?  You had the world inside your hands, but you did not seem to know…..and now we don’t either.

It has been said that the best form of government ever devised is a loving father and mother leading a family well.  In our current climate of people rushing to redefine marriage and family, there are plenty who don’t want or can’t allow themselves to see fatherhood as the solution.  But it is.

Fathers matter.  Deeply.  There is no getting around it.

And it shows even in our lack of them.  Those haunting lyrics of that song…they point to an obvious truth:  Art isn’t angry because his father was insignificant….he is angry because his father was tremendously significant!  If fathers and the absence of them don’t matter, then why write that song?  See, the lack of fathers and the pain that results from it points to the reality we can’t hide from—we NEED them.  His last verse shows it to be true as he “swears” to be a dad who is there for his own daughter and “not let her know all the pain I have known.”  The lack reveals the need.

The research is already there and it grows every year.  And the statistics come from all sources.  This isn’t just a “Christian-culture-thing.”  Slowly but surely, some are beginning to realize what’s true about the best form of government ever devised.  We NEED good dads.  There is no substitute.

Forget what the shows think is “modern” or the “new normal” about families.  No, what has always been true is more painfully true and obvious now: fathers matter.  Our culture desperately needs men who will love their wives and children and lead them well.

It is the solution we crave.  It may be painful to acknowledge.  It may mean we have to take a fresh look at what really defines fatherhood, not what the stupid shows tell us.  No, the politicians and policies can’t fix what’s killing us, not to the degree we need.  Their band-aids can never address the deep cuts that are showing.  We must go for the solution that impacts us across the board.

Don’t vote just yet…there is a Father you need to meet.

Thanks for reading and your comments/insights are always welcome.