The Future Belongs To The Brave

“Look, the whole goal for us here is to wipe out all of humanity,” said my brother. Thankfully, he wasn’t describing some real-world agenda as if he was an evil mastermind. Instead, he was telling me about a game called “Plague,” that you could get on your mobile device. And yes, the goal is indeed to…well…wipe out humanity with your virus.

Plague puts you squarely in the seat of the villain. You aren’t playing the dashing band of heroes racing against a deadly outbreak – no…you are the sinister virus incarnate. You are the bringer of havoc.

As you mutate your virus to stay one step ahead of the humans, you see your progress indicated by a growing number of red dots noting infections ALL over the globe. If you win, the entire world will be covered in a wave of red.

Playing through Plague several times, I was struck by this map of “progress,” especially when I’d win. The infection was everywhere. The spread was complete.

Arriving To A Harvest That Doesn’t Exist

When you read through the book of Micah in the Old Testament, you are seeing a man who is forcefully calling out the sins of his people, especially those in power. Micah clearly earns his nickname of the “prophet of social reform” because he preaches against the oppression he sees forced upon the weak by those in places of power (judges, rulers, royalty, etc). God, through Micah, is saying it boldly and plainly, “This isn’t how it is supposed to be. This isn’t why you’ve been granted power – to just take for yourself. Repent, turn back now, for judgment soon comes.”

Finally, he concludes his book with chapter seven. In one sense, Micah seven is a heartbreaking picture of reality. He tells it truthfully: this is a broken and fallen world filled with sinful people doing sinful things.

“Woe is me! For I am like the fruit pickers, like the grape gatherers. There is not a cluster of grapes to eat, or a first-ripe fig which I crave. The godly person has perished from the land, and there is no upright person among men…..Concerning evil, both hands to it well. The prince asks, also the judge for a bribe.”

He says he feels like he’s arriving to a harvest where there’s nothing left to gather up. Or a festival that never begins. There are no people left who care about righteousness and justice. Those in high places like princes and judges are really just waiting for the highest price to sellout. Fairness is forgotten; justice is compromised by cash.

He takes it a step further:

“Do not trust in a neighbor; do not have confidence in a friend.  From her who lies in your bosom guard your lips.  For son treats father contemptuously, daughter rises up against her mother, daughter-in-law against her mother-in-law; a man’s enemies are the men of his own household.”

Now the bombs land closer. It’s not just the powerful who are afflicted. This is in our homes. Sons against fathers, daughters against mothers, husbands and wives. It is personal and painful. There are no men and women like a Psalm one tree.

In essence, Micah says, “The plague of SIN has infected us. It has spread all over our map. There’s no hiding from this. It’s in the powerful, it’s in you, and it’s in me. We all have the red dots on us.”

Micah isn’t closing his eyes to what’s happening. He won’t back off the word “sin” because it may offend. He tells the truth about what is happening.

The infection is everywhere. The spread is complete.

The Future Belongs To The Brave

On January 28, 1986 our country witnessed a tremendous tragedy. Just 73 seconds into it’s flight, the NASA space shuttle Challenger exploded and all seven people aboard were killed. This was a tragedy in real-time; many saw it happen on live TV. I was just a young boy but I still remember the images and clips well.

That night, as the sun was going down on a dark day in American history, President Ronald Reagan gave what is, in my opinion, one of the finer speeches in our country’s history. In the context of a heartbreaking experience, his words brought a measure of comfort and assurance. At one point in his speech, he even addressed the young kids of America, like me, who witnessed this on television:

“I want to say something to the schoolchildren of America who were watching the live coverage  I know it is hard to understand, but sometimes painful things like this happen.  It’s all part of the process of exploration and discovery.  It’s all part of taking a chance and expanding man’s horizons.  The future doesn’t belong to the fainthearted; it belongs to the brave.  The Challenger crew was pulling us into the future, and we’ll continue to follow them.”

I will grant you that our culture has lost the real meaning of “bravery.” That much is abundantly clear. The headlines will tell you that some person was “brave” for wearing an “outfit” that barely covers their body to an award show. Others are championed for “bravery” when they fire off some “clapback” on social media. Spare me, please.

True bravery is what President Reagan was calling on. True bravery is not backing down when storm clouds darken the horizon. True bravery is feeling the weight of gravity and failure pulling you down but setting a course for the skies anyways. Bravery is taking even just one step forward in the right direction when adversity rails against you.

The future doesn’t belong to the fainthearted. The future belongs to the brave.

Micah’s Line In The Sand

Staring down the overwhelming plague of sin, Micah responds with real bravery.

“But as for me, I watch will expectantly for the Lord;  I will wait for the God of my salvation.  My God will hear me.  Do not rejoice over me, O my enemy.  Though I fall I will rise; though I sit in darkness, the Lord is a Light for me. I will bear the indignation of the Lord because I have sinned against Him, until He pleads my case and executes justice for me.  He will bring me out to the light, and I will see His righteousness.”

The fruit-picker with no harvest will remain steadfast. With enemies in his own household, he will not lose heart. The sinner will wait patiently for the holy God. The seventh chapter of Micah doesn’t just stop with a heartbreaking picture of reality, it concludes with a man finding hope. 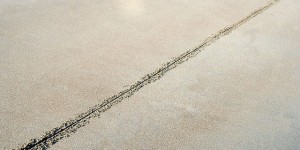 Others may give up in the face of such a broken and fallen world. The fainthearted will just accept that “that’s just how things are.” Not Micah. “But as for me.” The man is courageously drawing a line of distinction. He will take that first step forward in the right direction.

The map may be red with sin but there’s a Cure available.

The future belongs to the brave.

The Case YOU Can’t Make

Micah’s words are a preview of what will come in the Person and work of Jesus Christ. You hear echoes of the future in his gutsy prayer when he writes: “I will bear the indignation of the Lord because I have sinned against Him, until He pleads my case and executes justice for me.”

Consider for a moment the shocking words you just read. Micah is essentially saying, “I know I have sinned against a holy God and that His wrath (indignation) is right and justified. And that wrath is now rightfully aimed at me. So I will wait. I will let this God handle my case. I will trust in Him to execute justice for a hopeless sinner like me.”

Micah knows his map is completely red…but he’s counting on a God who can make it white as snow.

Apart from the Gospel, it would NEVER make sense to walk into a courtroom when you are absolutely 100% guilty and ask the judge presiding over your case to defend you and render a verdict that will help you.

Yet this is the trust Micah brings to God. A foretaste of glory divine.

In 1 John 2:1, centuries after Micah’s time, John gives us a truth that brings light to the darkness of our sin and guilt. He writes:

“My little children, I am writing these things to you that you may not sin. And if anyone sins, we have an Advocate with the Father, Jesus Christ the Righteous.”

To be clear: the “evidence” Jesus brings to God IS NOT your good works, your nice efforts, your religious activities, or your moral record. Instead, Jesus Christ “the Righteous” says God can execute justice by declaring us NOT GUILTY because Jesus has been counted guilty for us already.

At the Cross, Christ bore all the wrath and indignation of God’s holy justice that was due to us, so that we might know the permanent acceptance and warmth of God’s unending love. He took your Plague so that you can be pardoned. Jesus is the Advocate and this is the case that only He can make.

“The God who’s over us, He is here now with us!

The God who reigns above, He is the God who loves

The God who is our Judge, is He who pleads for us

The God who gave us life, He is the God who died”

So we can wait, we can endure, we can find our bravery in Jesus Christ. Though we may see the red dots of sin all around us and IN us, we will not grow fainthearted. We can take this Light of the world into the darkness that others face and we can tell the truth. The whole goal here is the redemption of humanity.

Jon Foreman wrote a song about Micah 7 and it is worth your time. Not only are the lyrics faithful to this monumental chapter of Scripture, but the music matches in such a beautifully true way.

Then, there is hope. There is light. The first right step is taken. The music itself changes.

“Both of His hands are equally skilled, at showing me mercy

Equally skilled at loving the loveless

This chapter and this song have been a difference-maker in my life. I pray they are for you as well. May you not be faint-hearted. May this Scripture, this song, and these words I’ve written point you to Jesus. May you be brave when hard times come.

The future doesn’t belong to the faint-hearted. The future belongs to the brave.